It's All Been Done Before 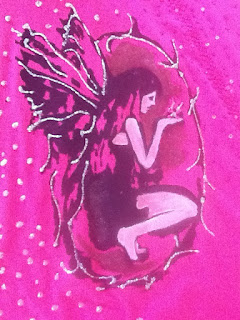 Isn't that a cool fairy? My friend Georgette made a shirt for me with her on it. Georgette knows that there are a million different variations of fairies out there, and yet she still created this piece of art. Boy am I glad she did! But why? How did she know it would work out?


Well chances are she didn't. She had a vision, and she went for it. Probably, the details revealed themselves as she worked on it. But what she DIDN'T do was say, "oh well it's been done, so it isn't worth my time."


Some people say there are only 7 plots, and every story we write fits into one of those slots. There are variations of course. I've heard 3, 9, and 13 as well. But the point is the same. Why do it if it's already been done?


Because it isn't the story. It's how it's told.


You can make it unique by taking a fresh perspective. Yes, EVEN dystopian and paranormal romance. Here are some tips, followed up by some CRAZY/SILLY ideas that just popped into my head - and by the way I am not advocating re-writing the books mentioned, just trying to get you to think out of the box:


Is market important? Yes. But it's not everything, and by the time you write and revise it, the market will have changed anyway. If you put your energy into something you love, it will show.
Posted by Lisa Gail Green at 3:23 AM

Email ThisBlogThis!Share to TwitterShare to FacebookShare to Pinterest
Labels: change it up, Plot